David Aznar's squad kicked off preparations for the 2021/22 campaign.
The Real Madrid women's team completed their first pre-season training session. The squad got the session underway at Real Madrid City with a warm-up with and without the ball and then split into groups to work on possession and finishing in small spaces. They then played several small-sided games. To finish, the players undertook fitness and specific work on the pitch.

David Aznar will once again lead the squad, with Irene Ferreras alongside him as assistant coach. The rest of the coaching staff is made up of Antonio Caballero, as fitness coach, Óscar Gaspar, goalkeeping coach, and Eugenio Buza, rehabilitation coach.

On Thursday 5 August, the team will play their first friendly against Sparta Prague in the KAIF Trophy in Leoben (Austria). Their first official match will take place on 31 August or 1 September in the first leg of the second round of the Champions League. The European knockout game will be decided on 8 or 9 September. Immediately before that, on 4 or 5 September, the first league game will take place away to Levante. 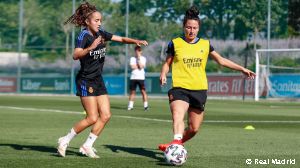 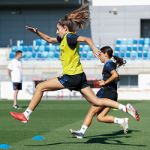