Real Madrid beat Sevilla following a last-minute comeback (2-1).
Real Madrid won their tenth Spanish Cup on 8 July 1962. The team claimed the trophy at the Santiago Bernabéu in an intense final against Sevilla that was decided in the dying stages. Puskas was the star of the match, scoring two goals, the first from the penalty spot and the second in the last minute to give Madrid the win.

Miguel Muñoz's sied secured their second title of the season after winning LaLiga. Averaging more than 3 goals per game in this season's Cup (28 goals in 9 games), the team made the final after beating Real Sociedad, Elche, Barcelona and Zaragoza. 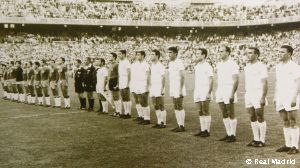