Modrić made his debut two days after his presentation, on 29 August 2012, and did so in style: lifting the Spanish Super Cup in his first match against Barcelona at the Santiago Bernabéu stadium. A brilliant career began that day, during which he's made 391 appearances and scored 28 goals.

Statistics and key facts
Modrić's appearances for Real Madrid have come in six competitions: LaLiga (266), Champions League (86), Copa del Rey (22), Club World Cup (6), Spanish Super Cup (7) and European Super Cup (4). His most prolific season in terms of goals was the one that has just come to an end. Scoring 6 goals and providing 4 assists in the 48 games played. 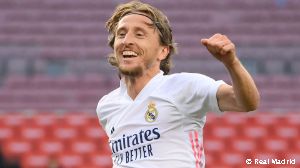