Madrid must win and hope that Atlético fail to do so away to Valladolid in order to retain the league title (6pm CEST).
The moment of truth has finally come - Real Madrid will battle it out today on the final matchday of the season for the chance to clinch the league title. The Whites hosts Villarreal at the Alfredo Di Stéfano stadium (6pm CEST) knowing full well that only a win will do. Madrid will then have to hope that Valladolid can get a result in their home at against Atletico Madrid at the José Zorrilla stadium, where the hosts will be fighting to stay in the division.  If the rojiblancos win they will be crowned champions, but if they draw or lose, Zinedine Zidane’s side will lift their 35th league title trophy, providing they beat Villarreal.

Real Madrid will be hoping they can continue their rich vein of form in LaLiga, which has seen the side string together a run of 17 games unbeaten, and will take inspiration from the last season’s final fixture, when the Whites overcame Villarreal in the same situation to pick up their 34th league title.

“We're going to deliver our highest level to try and win LaLiga”, said Zinedine Zidane in the press conference ahead of the crunch match. The French coach may be without Toni Kroos, Lucas Vázquez, Dani Carvajal, Eden Hazard and Ferland Mendy, but the squad has proved on many occasions that it has what it takes to come through the most challenging moments. Zidane has named this squad for what will be the most important match of the season.

Europa League finalists
Villarreal have already guaranteed a spot in Europe for next season along with Real Sociedad and Betis, but it remains to be seen whether they will finish in fifth, sixth or seventh place in the table. However, the Castellón side’s most important game in the club’s history will take place on Wednesday, when they take on Manchester United in the final of the Europa League. 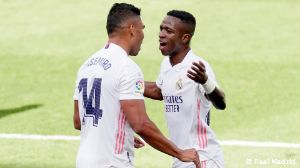