The league leaders lost at the WiZink Center have their destiny in their own hands as they look to finish top of the Regular Season.
WiZink Center
69

79
Real Madrid recorded their second defeat in the league at the hands of a fresher and more clinical Valencia Basket side. Laso's men fell behind and although they improved in the second half it proved not to be enough time to get in front. Two games left in the regular season, the leader, who holds a two-win lead over the second-placed team, remains in good shape for the top spot. Carroll played his 700th game in a Madrid shirt and Poirier was the team's best player with 16 points, 7 rebounds and 19 PIR.

Real Madrid were back in action at the WiZink Center 21 days after their last home game and wearing their Star Wars-inspired black kit for the first time. Tavares and Abalde were missing, the former being rested and the latter due to illness. It took the home side time to get into the game. Valencia Basket started with more pace and were very accurate in attack. Tobey, with 12 points, made the difference opening up the first significant lead at 7-22 in the seventh minute, a lead that was held for the rest of the first quarter, thanks mainly to his three-point shooting (12-27, min. 10).

Real Madrid behind
The leaders struggled to find a way past Valencia Basket's defensive intensity, gradually building up a lead of more than 20 at the midway point of the second quarter (19-37). Laso made rotations in search of answers, but the only Poirier came up with a reply. 2/13 three-pointers and the mistakes on easy baskets took their toll. Taylor's two three-pointers and the energy he brought in at the back with Tristan saw an 8-4 run reduce the gap before the break (27-43).

Laso called on Carroll, unused until now, to try and mount a comeback. The shooting guard gave the team a new lease of life in attack with his points and his teammates also scored more easily. Madrid got within 10 points on several occasions thanks to a lot of hard work and a strong offensive rebound. Valencia Basket fought back with three-pointers and free throws, encouraged, in part, by the three technical fouls issued against Madrid, and regained a +17 lead at the end of the third quarter (43-60).

Up against the clock
The home side's biggest problem was that they couldn't get into a good rhythm. Prepelic further added to the problem by putting Ponsarnau's team +19 up at the start of the final quarter (43-62, min. 31). The leaders refused to give up, as they never give up. Llull and youth product Tristan led the way for the side as they tried to get back into the match, pulling within eight points in the final minute at 69-77. But their opponent was superior and responded to every three-pointer in the quarter with another to prevent the comeback. The WiZink Center will host the next match against Bilbao Basket on Thursday 20 May (9:15pm). 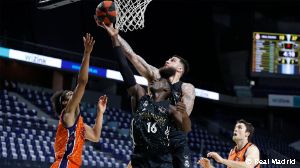 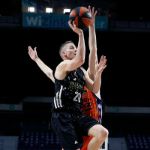