On 5 May 1973, Real Madrid claimed the title after downing C. B. Manresa.
Today marks the 48th anniversary of Real Madrid's 15th league title. Pedro Ferrándiz's men were crowned champions in Round 27 of the season after running out 62-96 winners over C. B. Manresa. The standout performers in that match-up were Emiliano (24 points) and Luyk (19). This was the team's sixth league title triumph in a run of 10 straight league successes, which represents the best such streak in the competition's history.

Real Madrid was the dominant force in the 1972/73 season, in which the Whites won all 30 games and amassed 60 points, which was eight more than second-placed Joventut. The madridistas did the double in that season after also clinching the Spanish Cup and boasted a roster that featured iconic names such as Emiliano, Luyk, Brabender, Cabrera, Corbalán and Rullán. 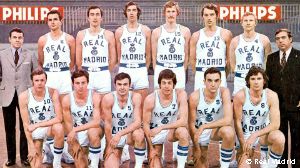