The team goes in search of victory in the fifth and final game in Istanbul to complete an unprecedented comeback in EuroLeague playoff history (6:45pm CET).
Forty minutes is all that separates Real Madrid from a fourth successive Final Four, a seventh in eight years and an eighth appearance in the last 10 years. Impressive stuff indeed. To book its place in the last four, the team must achieve an unprecedented feat in EuroLeague history by completing a comeback after having been 2-0 down in this playoff series. This evening sees the fifth match-up at Istanbul's Sinan Erdem as Madrid has a date with the history books against a Anadolu Efes team that will be doing its all to stop Madrid in its tracks and qualify for the Final Four for the second time in the club's history.

Following a tough season that has been full of setbacks, Pablo Laso's charges are just one win away from clinching a spot in the Final Four. Just 13 days ago, the Whites were pretty much out of the competition and now have the chance to round off a heroic playoff campaign. On the two occasions in which the madridistas have been involved in a series that has gone to a fifth match, they have prevailed, against Olympiacos in the 2013/14 season and Power Electronics Valencia in 2010/11. The guests have now shifted all of the pressure on to the Turks, who made the final two seasons ago and was ranked as favourites last time out before the pandemic broke out.

How will the fifth game pan out? It’s difficult to say. Both teams know each other inside out, but there’s always room for a surprise. Anadolu Efes was heavily dominant in the first two contests, before Real Madrid reacted by producing a host of magical moments to regain its confidence. The key to this match-up will be the intensity levels, a facet that for Laso is a basic element of any performance. The rest will all come down to just how inspired the big names are, the likes of Llull, Rudy, Carroll, Larkin, Micic and Beaubouis, etc. Whilst it remains to be seen whether Thompkins, who was injured in Game 4, will be involved and a possible return for Tavares, Garuba is set to once again play a key role. His massive rise in this series, in which he has averaged 12 points and 7.3 rebounds, has been pivotal in the Whites’ fightback. However, we mustn’t forget Tyus, whose disciplined approach and power has helped to make up for the Cape Verde man’s absence in the paint. 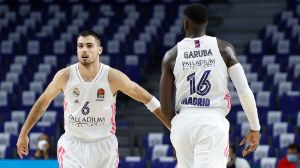