The Brazilian has netted six times this season, bettering his 2017/18 return.
Casemiro got the final goal in Real Madrid's win over Osasuna at the Alfredo Di Stéfano and has not bagged six LaLiga goals this season. The Brazilian is currently enjoying his highest scoring campaign, bettering the five goals he bagged in the 2017/18 LaLiga season. The midfielder opened his scoring account in the league on matchday 11 against Alavés at home and was amoungst the goals again at the Di Stéfano against Atlético and Granada.

His next two goals came at Mendizorroza and José Zorrilla, before he was on target against Osasuna last time out. Casemiro is leather in the air, with four of his six goals being headers. In all competitions, Casemiro's return is seven goals, thanks to the one he scored in the Champions League visit to Borussia Mönchengladbach.

League record
Casemiro is Real Madrid's second top scorer this season, behind Benzema (21 goals). As for his overall scoring record as a Madridista in LaLiga, the Brazilian has got 23 to his name since his first goal in March 2016 in a trip to UD Las Palmas. 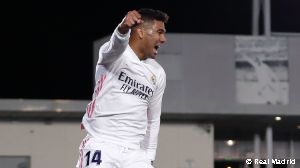