Real Madrid make their best away start in the ACB with a 16-0 win record. Exhibition by Carroll (20 points in 20 minutes).
Fernando Martín

90
Real Madrid came out on top against Urbas Fuenlabrada at the Fernando Martin recording their best away start in the history of the ACB with a 16-0 run. A hard-earned victory that was set up in four minutes of genius, from 18' to 22', setting up a 0-22 run that was decisive. Five players ended with double-digit scoring in another impressive team performance, led by a brilliant Carroll with 20 points in 20 minutes, and Alocén with his best game for the Whites (10 points and 5 assists). The league leader has 31 wins in 32 games and a streak of 17 consecutive victories.

The leaders, without Tavares who is still recovering from his injury problems, took the court at Fernando Martín ready to make history. First of all, they came up against an Urbas Fuenlabrada team that played at a high offensive tempo. Seven points from Meindl gave his team the lead at 11-6 in the fourth minute. Madrid were not comfortable in defence, but held their nerve thanks to Carroll and Abalde (6 points each) as the focal points in attack. It took them 8 minutes to turn the lead around for the first time in the game at 17-18, in a very tight first quarter which saw them gradually grow in to the game (22-23).

Madrid take the lead
Both teams fought hard to take control of the game, but neither side could get a strong hold on things. Urbas Fuenlabrada loaded the offensive rebound well with Sharma and picked up points on the counterattack against Real Madrid who were at their best on the free throw. A timeout by Laso in the 18th minute proved to spark the Whites in to life. Alocén and Rudy brought the team that extra energy (10 points between them) with a 0-12 run that changed the dynamic of the game and saw them to go into the break in front (38-46).

The madridistas went into the third quarter as switched in as they finished the first half. Rudy took stepped up with two consecutive three-pointers putting Madrid firmly in the game, increasing the deficit with a 0-22 to open things up to 18 points at 38-56 in the 22nd minute. Laso's team held firm against the home side's onslaught from Novak and Alexander. Carroll and Garuba responded through point scoring and drive, bringing the score to 56-66 at the end of the third quarter.

Carroll on song
Urbas Fuenlabrada refused to give up and, thanks to their success in the three-pointer at the start of the final quarter, looked to cause Real Madrid problems but, once again, the leader's response was strong and once again Carroll was at his best. The American put on another display, scoring a point per minute (11 in this period), enabling them to maintain a comfortable lead until the end, always in the double digits (76-90, min. 40). The focus now switches to the third Euroleague playoffs game on Tuesday (7pm CEST). 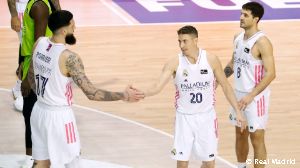 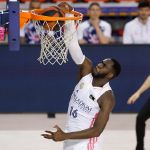