Real Madrid downed Olympiacos 73-61 in the final in Zaragoza.
Real Madrid was crowned European champions on 13 April 1995 for the eighth time in the club's history. Fifteen years on from the seventh continental trophy, our team reigned supreme again in Europe after overcoming Olympiacos in the showpiece in Zaragoza. That roster, coached by Obradovic and led by Arvydas Sabonis, will forever have a place in madridista folklore.

Our team reached the final after seeing off Limoges in the semis (49-62). Despite the great potential of the Greek side, Real Madrid dominated and headed in at the interval with a 38-28 lead, which it extended to claim a 73-61 and secure glory. Sabonis (23 points) and Arlauckas (16) were the top scorers for Real Madrid, who continue to dominate European basketball, with 10 trophies to its name. 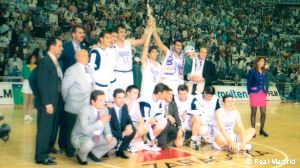