The league leaders beat Baxi Manresa in their third away game in 5 days. Deck was the key man with 13 points in the final quarter.
Nou Congost

77
Real Madrid clinched another away win in the league, their fourteenth of the campaign so far, equalling their second best start on the road in the ACB to make it 26 victories in 27 games in total. They got the better of Baxi Manresa at the Nou Congost in an intense clash which they closed out right at the end thanks to a fine defense and a decisive spell from Deck. The Argentine hit 13 of his 17 points in the final quarter. Tavares posted a double-double (10 points, 11 rebounds and 4 blocks) and Alocén (8, 7 assists and a PIR of 18 in his best madridista display) also performed well for Laso's side, who put the gloss on a perfect week, having already seen off Obradoiro and Asvel. The leaders have now won all of their last 12 games.

Madrid flew out of the blocks with a 2-12 run inside five minutes to take control of the opening quarter on the basis of their rock-solid defense. The teamed looked focus and was playing with intensity, while Tavares was in intimidating form and Carroll popped up wherever he was needed (5 points, 4 rebounds and 2 recoveries). They restricted Baxi Manresa to 13 points and only Ferrari caused the Whites any real problems as Tyus (6 points) and Alocén (3+3 assists) also looked in great shape. A lack of clinical edge from the outside was all that saw Laso's men fail to build up a greater lead early on (13-17, min. 10).

Madrid stay out in front
The home side came back into the game in the second period. Three away games in five days looked to be catching up with the Whites, especially up top. Eatherton and Sajus were causing damage in the paint and Janning put the hosts 5 up on 27-22 with 17 minutes gone. The league leaders responded by rediscovering their defensive aggression and offensive rebound, and finally started to find their range from the three-point line - the team's first two triples ended the Baxi Manresa run. Causeur, with 7 points in the closing stages of the first half, stepped up as the team's offensive reference point, before a Alocén three-pointer sent the team in with an advantage at half-time (32-35).

The madridistas came out strong once again and took the initiative early in the second half, boosting their lead to 12 points at 35-47 with 24 minutes on the clock. Five points for academy graduate Tristan led a 3-12 run in the visitors' favour as they looked focused at the back, forcing the home side into turnovers. Indeed, the hosts weren't out of it yet and a burst of energy as the Mason-Báez duo came to the fore saw them work their way back to 50-54 at the start of the final quarter.

Deck proves decisive
Madrid remained solid against the onslaught of opposition who gave it everything they had until the final seconds. Laprovittola and Tavares gave the team a bit of breathing space, making it 52-62 on 34' but Baxi Manresa went direct and were punishing the Whites' defense on the counter led by an inspired Dani García. It was the key point in the game, and that's when Deck stepped up. The Argentine dragged his team up and posted 13 points in the quarter to contain the opposition and ensure Madrid took a hard-earned victory, sealed from the free-throw line (76-77, min. 40). It's three from three to close out this week, before heading into more of the same over the next seven days, this time all at the WiZink Center. 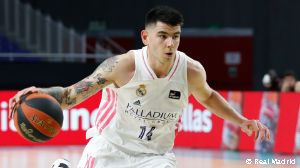