The Whites downed Monbus Obradoiro in the rearranged Round 20 match-up to make it 25 wins in 26 games and remain top and unbeaten on the road.
Fontes do Sar

87
The league leaders won on Monbus Obradoiro's floor in the rearranged league Round 20 contest to record an 11th straight win that sees the team remain unbeaten in its 13 road trips. Pablo Laso's men established a good lead in the first stanza (16-23) that they went on to defend solidly throughout the rest of the game. This was a fine team showing with Laprovittola and Causeur (17 points) leading the way amongst four players who claimed double digits in the scoring stakes. Carroll produced a masterclass with 12 points (4/4 on treys) in the final 12 minutes. Garuba, in his 100th match for the club, had 12 points, eight rebounds and a PIR of 20. This result saw Real Madrid make a good start to this demading week of road trips, with visits to Asvel (Thursday) and Manresa (Saturday) to come.

The madridistas made a very disciplined start at the Fontes Do Sar and looked solid in defense, where Taylor was counteing the threat posed by the hosts' top scorer, Robertson, and the Tavares-Garuba pairing was dominating on rebounds and not allowing Obradoiro any chances on second shots. Laprovittola paced his team in an offense that was very fluid as he produced another scoring masterclass. He netted 10 points, which added to six from Garuba set Real Madrid up for a first run of 4-20 with barely six minutes on the clock. The hosts posted several baskets following the introduction of Enoch (seven points) to prevent the Whites, who had enjoyed a strong first quarter, from pulling away (16-23).

Madrid counters hosts' riposte
Obradoiro upped its defensive intensity and began to find its feet in offense in the second stanza to limit a Real Madrid side that managed to maintain its lead with Causeur playing a starring role (seven points and two turnovers). With the scores at 27-32 in the 16th minute, Laprovittola and Tyus breathed life into the team in offense to establish a comfortable 10-point lead at the interval (32-42).

The madridistas showed no let-up and displayed cool heads as the team looking to display its collective strength. The Whites were controlling the game and Obradorio's surges, featuring Robertson and Enoch, that kept the hosts in the contest. Garuba, who is becoming an ever more important member of the roster, sunk a series of three-pointers (4 plays featuring 3+1), whilst Taylor and Thompkins countered the hosts' points to retain the lead in the third quarter (49-58).

Result beyond doubt from three-point line
The game was not yet ever, despite Real Madrid giving the impression of being in control. The Galicians made a strong start to the final stanza to move back within four points on several occasions, the last of which came on 33 minutes (58-63). However, Laso's men managed to deal with the situation and produced a solid response, with three-pointers proving to be the team's go-to weapon. The guests netted five treys during the final stanza. Three of them came from Carroll in his first minutes on court and another from Causeur extinguished the hosts' fightback within a 2-11 run that set Madrid up for victory with four minutes remaining (60-73, min.36). Obradoiro kept going but once again Causeur and Carroll put paid to the home side's hopes from the three-point line. The shooting guard produced a masterclass featuring four treys (12 points in as many minutes) and Madrid claimed victory on the road by a 16-point margin (71-87). In 48 hours' time, the Whites face another cup final in the EuroLeague on Asvel's court (8:45pm CET). 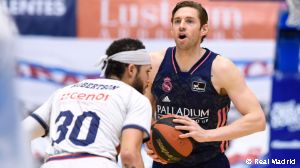