Real Madrid has secured the spoils in all 11 of its away games and has now made it 22 wins in 23 matches.
Palacio de los Deportes

74
Real Madrid recorded its eleventh away win at UCAM Murcia, its 22nd from 23 outings. The team has now amassed eight consecutive victories in the competition and remains undefeated so far this year at the top of the table. The Whites lived up to their tag as the strongest away side in a game they dominated defensively, equalling their best record of the season (58). Tavares, with 16 points and 7 rebounds, was the top scorer in an attack with four players in a double-digit scoring (13 from Carrol, 11 from Causeur and 10 from Deck). The French forward played his 250th game for the Real Madrid. Tyus also put in a good performance (7 points and 13 PIR).

Madrid's outstanding defensive play set the tone for a game of few points in the first quarter. The leaders restricted UCAM Murcia to just six (two three-pointers) as they scored 16 of their own, the result of well-balanced inside and outside play. Tavares and Tyus - with 4 points and 7 in PIR apiece - were the standout players for the madridistas, who totally controlled the pace of the game and restricted the threat posed by the home side's rebounds.

Madrid led throughout the contest
Causeur and Reyes were instrumental on the court (Tristan also made an appearance), as Pablo Laso's charges surged to a 13-point lead midway through the second quarter (12-25). The visitors could have extended their impressive lead had it not been for a lack of precision in attack. Former Real Madrid academy player Cate led an 8-0 run that brought the score to 24-30 at the end of the first half.

The Whites dug deep to remain on top in the third quarter in the face of the home side's pressure. They showed the same intensity and came through the spell that was played at a very slow pace because of several interruptions due to the countless fouls. The visitors showed great composure and when it seemed UCAM Murcia might draw level, individual players stepped up in attack – first Tavares and Tyus, followed by a superb Carroll. With the score at 40-42 in the 27th minute, the American shooting guard recorded eight consecutive points in the following three minutes to extend his side’s lead to six points going into the final quarter (44-50).

Leaders up the pace
The game was end to end stuff in the fourth quarter. A five-point run from the start by the madridistas increased the lead to 44-55 with Causeur at the forefront. Murcia refused to give up and Davis inspired the home side, who edged dangerously close to drawing level. The hosts got to within five points at 50-55 in the 34th minute. But Madrid had other ideas and the visitors showed great discipline in defence, whilst they attacked clinically. Deck, Alocén, Tavares and Carroll put an end to the opposition's fightback. A three-pointer from the shooting guard sealed the game at 58-72 in the final minute. It was a convincing victory (58-74) in a decisive last quarter thanks to a 14-24 run.  Real Madrid picked up its second away win of the week before the EuroLeague Clásico match next Thursday (9:00pm CET). 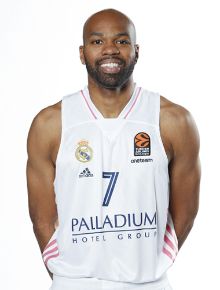 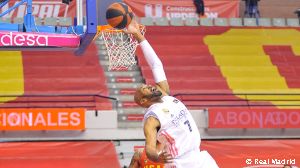