0
Real Madrid kicked off the year with a home win over Madrid CFF to further strengthen David Aznar's side's position at the top of the table. The Whites have now picked up ten wins in the Primera Iberdrola, thanks to a dominant performance in which Jakobsson and Cardona grabbed the goals. With 31 points, Real Madrid currently sit at the top of the league.

The Whites played with a real intensity from the off and it didn't take long for Cardona to register the first chance of the match with a header that missed the target after 7 minutes. The forward led the line well for Real Madrid and was involved in more chances, first cutting back and getting her shot off before it was deflected behind and later hitting the woodwork with a long-range effort. Asllani was first to the rebound, but the ball ended up in the hands of the visiting goalkeeper. With two minutes to go before half-time, David Aznar's team found the breakthrough. Robles crossed from the right and Jakobsson finished acrobatically to beat Paola.

Constant pressure
After the break, Madrid CFF looked to level things up, but the home side kept up the pace and continued to create danger. Kaci tried her luck from the edge of the area with a powerful strike that was kept out by Paola; Jakobsson was quick on the rebound but the keeper was able to keep it out again. Cardona capped off a great performance making it 2-0 after a brilliant counter-attack in the 83rd minute. Real Madrid got the new year under way on the right foot and recorded their second victory in a row. 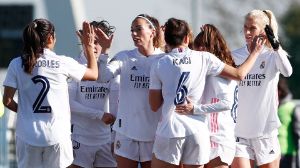 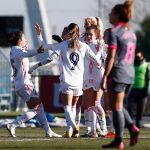