Real Madrid will compete in three different competitions during January.
After getting 2021 off to a winning start against Celta at the Alfredo Di Stéfano, Real Madrid have an intense first month of the year. Zidane's team will play matches in three different competitions: three more LaLiga matches, the defence of the Spanish Super Cup title and the opening Copa del Rey game.

Real Madrid's next match will be on Saturday against Osasuna (9pm CET). After the LaLiga matchday 18 game at El Sadar, the Whites play the Spanish Super Cup. The team will take on Athletic in the semi-finals at La Rosaleda (Thursday, 14th January) with the aim of defending the trophy three days later in the final at La Cartuja (Seville).

The return of the Cup
The following week, the Whites play their first Copa del Rey game in the round of 32 against El Alcoyano at the Municipal de El Collao on 20 or 21 January. They then return to LaLiga action on 23 January with a visit to take on Alavés at Mendizorroza (9:00pm CET). If Real Madrid make it through in the cup, they will play the quarter finals in the last week of the month in a one-off match. And to wrap up January, Zidane's team will host Levante in matchday 21 (30-31 January). 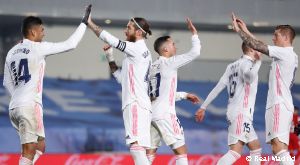