Kroos put Real Madrid ahead with a fine strike from range, only for the Basques to level but the French frontman then sealed victory in the last 15 minutes.
Alfredo di Stéfano

1
Real Madrid chalked up a fourth win on the trot in this rearranged Matchday 19 clash, brought forward on account of the Spanish Super Cup, at the Alfredo Di Stéfano on a night when the hosts dominated from start to finish. It took the Whites all of 10 minutes to fashion a first meaningful chance, with Lucas Vázquez playing the ball into the box and Karim Benzema contrived to send his left-footed effort from a slightly tight angle over the top. In the 14th minute, Athletic were reduced to 10 men after Raúl García was shown a second yellow. The madridistas had claims for a penalty waved away when Ander Capa handled in the 17th minute, but the hosts continued to boss possession and Fede Valverde fired in a shot from inside the box that whistled narrowly wide.

Zinedine Zidane's troops kept plugging away in search of an opener and came close to making the breakthrough in the 41st minute. Luka Modrić's cross was met by Vinicius Jr. inside the six-yard box but Unai Simón produced heroics to keep the ball out with his chest. In the next move, Valverde came close when his shot on the half-turn sailed over the bar. Just when it looked as if the sides were destined to go in all square at the break, up popped Toni Kroos with a sublime strike. Vinicius Jr. found the German, who unleashed a driven right-footed shot from just outside the D to make it 1-0.

Not long after the restart, the game took another twist as Athletic drew level with 52 minutes on the clock. Capa went through one-on-one with Thibaut Courtois after linking up with De Marcos and the goalkeeper kept the first attempt out but was helpless to stop the defender making it 1-1 from the rebound. Zidane sent on Isco and Asensio in place of Vinicius Jr. and Valverde and the chances continued to flow. With 74 minutes gone, Madrid got the reward their efforts merited when Marco Asensio's corner saw the ball played back to Dani Carvajal and he crossed for Benzema to power home a header.

Benzema makes sure
The game wore on, until deep into injury time, Athletic had a fine chance to equalise when Vesga was clean through against Courtois but the keeper stood up superbly to deny him. The potential leveller and the definitive 3-1 scoreline were separated by a matter of seconds, as Modrić’s measured through ball was finished beautifully by Benzema to complete his brace. Madrid have now won their last four games and conceded just a single goal. 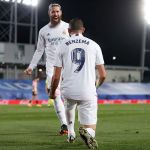