The team get the last month of the year underway from next Wednesday.
Real Madrid gets last month of 2020 underway on Wednesday against Baskonia, with 10 matches to be played before the end of the year. The demands will be high again for the team coached by Pablo Laso, who will play 6 Euroleague matches and 4 League matches, including the Clásico on Sunday 27th at the WiZink Center.

Madrid starts with three games in 5 days as they open the month hosting Baskonia in the round 17 league match which has been brought forward (Wednesday, 9:15pm). A big test for the unbeaten league leader, which has recorded 11 consecutive victories in this competition. Two days later, on Friday 4, in round 12 of the Euroleague, they will face Asvel Villeurbanne at home (9pm). They will complete the week on Sunday 6th as they visit San Pablo Burgos in the league (6:30pm).

There will be two matches in the second week of the month, both at the WiZink Center. On Thursday 10, against Zenit St. Petersburg, in the Euroleague round 13 match (9pm); and on Sunday 13, against Unicaja Malaga in the league (6:30pm). After this match, three consecutive Euroleague games will take place. First, a double round of matches in Greece: on Tuesday 15, a visit to Panathinaikos (8pm) and on Friday 18, a visit to Olympiacos (8pm). On Tuesday 22, they will host Alba Berlin in round 16 (9pm).

Two games to end the year
Good basketball doesn't end there. The cherry on top of 2020 will come with the league match against Barça, which will be played on Sunday 27 at the WiZink Center (9:30pm);a and the Euroleague match against Anadolu Efes in Istanbul on Tuesday 29 (6:30pm). 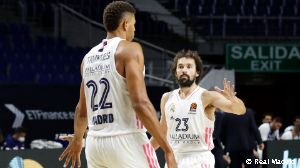