Real Madrid slipped to a first defeat of the LaLiga campaign and thoughts now turn to the Champions League opener.
Alfredo di Stéfano

1
Real Madrid fell to a shock defeat at the hands of Cádiz after returning from the international break. The first chance fell to the visitors almost straight after kick-off. Kroos lost possession at the back and Negredo beat Courtois when one-on-one, but Ramos cleared the ball off the line. This was an early warning from the Andalusian side, who were denied six minutes later when Courtois saved from Lozano when the striker was in on goal. The Madrid keeper then brilliantly saved a fierce shot by Cala from the edge of the box in the 13th minute, but the visitors went ahead after 15 minutes. A cross by José Mari was nodded down by Negredo and Lozano flicked the ball over Courtois.

Lozano was again denied by Courtois on the half-hour mark and the Whites almost drew level on 38 minutes. A corner by Kroos was headed inches wide by Varane. At half-time Zidane made four changes. Real Madrid dominated the game after the restart but struggled to break down a resolute Cádiz defence.

Benzema denied by woodwork
The chances began to materialise, the first two of which fell to Vini Jr. The forward evaded the attentions of two visiting defenders, before sending an effort over the bar from the edge of the area in the 56th minute. Ten minutes later, Toni Kroos played in a left-footed cross that the Brazilian met with a powerful header that beat Jeremías Ledesma all ends up but failed to find the net.

The hosts were pressing hard and the visitors were made to dig ever deeper. The Whites' pressure very nearly paid off when Karim Benzema's fierce strike struck the crossbar with 80 minutes on the clock. Real Madrid continued to probe but a leveller ultimately proved elusive and attentions now turn to Wednesday's Champions League curtain-raiser against Shakhtar (6.55pm CET). 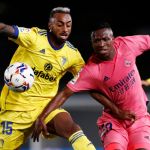