Real Madrid seal their place among the top four sides in Europe thanks to strikes for Marvin, Miguel and Morante and will now meet Salzburg.
Colovray Stadium (Nyon)

3
Real Madrid are into the UEFA Youth League semi-finals. The Whites beat Inter at the Colovray Stadium in Nyon and will now face Salzburg at the same venue on Saturday, after the Austrian side got the better of Olympique de Lyon in their quarter-final clash. Raúl's team dominated from the off, but the goals all came in the second half from the boots of Marvin, Miguel and Morante.

The chances took no time to materialise following kick-off. Pablo and Morante both shot at goal following some fine team play inside the first five minutes, before the latter again tried his luck from the edge of the box on 12', forcing the goalkeeper into a fine save. The Whites were well on top, dealing well with Inter's intense pressing, which saw them dealt 3 yellow cards with barely 20 minutes gone. The Italians did have a chance to take the lead from a corner, but Luis showed fine reactions to keep them out. In the final move before the break, Raúl's men sent the ball into the box in search of Latasa, but the ball fell to Arribas, who came close to giving Real Madrid the lead.

Penalties
As the teams came out for the second half, Arribas and Marvin both found their way into the box but were unable to find the target with their headed efforts. The madridistas' luck then seemed to be out when Inter's goalkeeper stopped a Chust spotkick on 58’. The move saw Inter reduced to 10 men as Vezzoni saw a second yellow card, and the complexion of the game changed. Marvin opened the scoring with a training ground move from a short corner, before Miguel did convert from the spot with 74 minutes gone to make it 0-2. With their rivals reeling, Morante put the game to bed with a fine header from a superb Arribas cross (83’). Real Madrid have sealed their place among the best four teams on the continent, alongside Benfica, Ajax and Salzburg, their upcoming opponents. 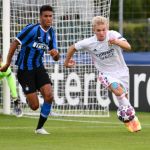