The team started out in Valencia with a win over Herbalife Gran Canaria, as Llull led the way to 37 points inside the first quarter.
Pabellón Fuente de San Luis

73
Real Madrid got the better of Herbalife Gran Canaria in the first Group B game of the League ACB Final Phase, currently underway in Valencia. Laso's men marked their return to competitive action with a superb display that left Herbalife Gran Canaria with no chance. A spectacular start saw the Whites race to a 37-16 lead in the first quarter, with 8/11 triples to boot, setting the game firmly in their favour despite a late surge from the opposition. Llull, with 19 points and a PIR of 20, led from the front, while a further 3 players finished in double figures: Carroll, 19; Randolph, 11; and Laprovittola, 11. Causeur made his 100th league appearance for the madridistas.

Any doubts following a three-month break in competition were swiftly dispelled by a Real Madrid side who began the game at a frenetic pace, coming close to matching the all-time record for points in a single quarter, with 37. The team's defense was infallible, restricting the island team to just 16 (turned over 5 balls), while the offense looked confident as they sunk 8 triples from 11 attempts. Laprovittola set the tone with a sublime 51 seconds that saw him post 8 points in a row (triple, steal and another triple). Randolph picked up the mantle with 11 points, and Llull got in on the action with a further 11 inside 5:33, alongside Carroll (8). The PIR scores of 52-6 and a 21-point lead were a striking reflection of the Whites' superiority (37-16).

Defensive efforts
Carroll took the lead to its greatest extent at +23 with two successive three-pointers at the start of the second quarter, at 43-20 (min. 12). Then, Herbalife Gran Canaria seemed to work their way back into the game through an impressive Costello, who finished the first half with 23 points, 15 in the second period, and the defensive diligence of the Spanish block of Beirán Paulí and Rabaseda. The islanders upped the pace in offense (32 points) and Real Madrid were struggling to match them. They found some relief from the three-point line once more, sinking another 5 to go to a total of 13 in 20 minutes and ensured they kept their lead over a rival who were threatening in spells. It was 58-48 at the break between the league's two best defenses.

Following the restart, both teams seemed to drop off in offense. For long spells in the third quarter, Real Madrid appeared to be struggling more than Herbalife Gran Canaria, who had more in the tank and came within 5 points of their rivals at 65-60 with 28 on the clock. Llull has come back on fire though (having not played since February), and took the initiative to carry the team into the final period with a 7-point advantage (69-62).

Madrid kill the game in the final quarter
With energy levels running low and Herbalife Gran Canaria displaying newfound belief (Costello made it 69-64 on 32 mins.), Laso's charges stepped up to deliver the decisive blow. Llull and Rudy were the key men in a physical five, as Deck also enjoyed a fine spell, and Real Madrid rediscovered the aggression they'd shown in the first quarter to crush the opposition offense. So intense were their efforts, that they doubled the Gran Canaria score in the final period, 22 points to 11. It was a big run at a key moment which was enough to seal a fine 18-point win (91-73) to place the Whites top of Group B at this stage. In less than 48 hours, it's game two against San Pablo Burgos (Saturday, 3:30pm CEST). 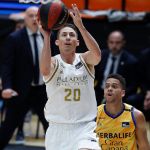