A Benzema brace and a strike by Asensio on his return clinch the win for the Whites' in a fine second-half display.
Estadio Alfredo Di Stéfano

0
Real Madrid are showing no let-up in the race for LaLiga, picking up their second successive win following the restart against Valencia this evening. A superb first-half performance was the key to the victory over Éibar, but it was the second period which proved decisive this time, all three goals coming after the break. Two for Benzema, the second a spectacular strike, and another for Asensio on his comeback from the serious injury he suffered in pre-season, made sure of all three points for the madridistas.

The game kicked off at a frenetic pace and both teams quickly enjoyed fine chances inside the first quarter of an hour. First, Benzema linked with Hazard, who latched on to the ball, but off balance, he failed to beat Cillessen in the one-on-one. Two minutes later and the visiting response arrived when Rodrigo went up against Courtois and the Whites' goalkeeper got the faintest of touches on the ball, just enough to push the shot on to the post.

Chances
As the minutes ticked by, the pace of the game showed no signs of letting up and chances continued to flow. Valencia did have the ball in the net on 21’, but Rodrigo's goal was ruled out by VAR and then the referee, who adjudged Maxi Gómez to have been in an offside position in the build-up. The scare brought the Whites to their senses and they quickly came close to taking the lead through a fine Carvajal move that forced Cillessen into a decent stop. The final opportunities before the break fell to Kondogbia and Hazard, but both long-distance shots met their match in a diving Courtois on 44’ and Cillessen in time added-on.

Real Madrid came out in dominant fashion after the break and Hazard and Benzema took another opportunity to show off their special connection with fifteen minutes gone, and this time it was lethal. Modric started the move and linked up with the Belgian, who slid the ball to the Frenchman to beat Cillessen with a shot with the inside of his right foot which flew past the visiting keeper. Five minutes later, Modric tried his luck with a powerful left-footed effort from the edge of the box but the shot-stopper was equal to it this time.

Asensio returns with a goal
The game wore on and with 74 on the clock, came one of the most anticipated moments for all madridismo: the return of Asensio, who was seriously injured on 24 July. He came back in the best possible way, scoring with his first touch. Mendy started the move with a nice run to the by-line and an even better assist for the Spaniard, who turned the ball home with a sweet volley. It was the dream return, highlighted by the smile with which he celebrated the goal.

Benzema's work of art
Real Madrid had already killed off the match, but the best finish of the night was yet to come. With 86 minutes gone, Asensio played in Benzema, whose first touch took him away from his marker without the ball touching the ground, before the second, a fine left-footed volley, flew past the keeper. In the 89th minute, Valencia were reduced to ten men when Lee Kang-In was sent off. The Whites picked up three points and kept a clean sheet. There are now 9 finals left to play. 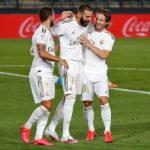