Pedro put the academy side ahead but Melilla turned it around in the second half.
Estadio Alfredo Di Stéfano

2
Real Madrid Castilla were unable to get any points on the board in their first clash of 2020. The academy team were beaten at the Alfredo Di Stéfano by Melilla (1-2) despite going ahead through a Pedro header. The visitors managed to come from behind in the second half to take the win, and Castilla's attentions now turn to Wednesday's postponed meeting away to Celta B.

The early stages of the game were evenly matched, with few chances for either side. Castilla slowly began to take control of the ball and cause problems down both flanks. On 18’, Pedro could have won a penalty after being pulled down by Diana in the area, as the hosts started to look dangerous. A Feuillassier chance was a warning of what was to come. Sergio López then crossed perfectly for Pedro to head home and make it 1-0 (28’). Pedro and Feuillassier both came close to adding to the lead before the break.

Second half
Castilla continued in search of the second goal when they came out after half-time. Marvin picked up the ball and his brilliant run ended with a strike which flew just wide of the target. Javi Hernández also came within inches with his fine free-kick shortly afterwards. Castilla failed to make their chances count though, and Melilla went on to take advantage. With 66 on the clock, Diana levelled things up when he headed in from a corner. Then, ten minutes later, Carrión completed the comeback with a shot across goal. Castilla refused to lie down though, and on 85’, Rodrigo did have the ball in the net for 2-2 but the referee ruled it out for a debatable offside against Javi Hernández. Pedro had two further chances in the closing stages but Melilla held on to take all three points. 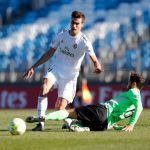