The ceremony took place at the arena within Real Madrid City.
The basketball roster have now received their official Audi cars following a ceremony held outside the basketball arena at Real Madrid City in an event that was attended by all members of the roster and coach, Pablo Laso. The team, led by their coach, posed for a group photo before climbing inside their new cars.

The agreement between Audi and Real Madrid was extended to include the basketball team in 2015 and this ceremony is staged annually. The German car manufacturer was represented by Pepe Soler-Roig, head of sponsorship and events, whilst Juan Carlos Sánchez-Lázaro, the head of the basketball department and technical director, Alberto Herreros, attended on behalf of the club. 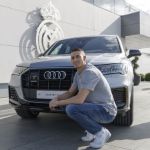