Real Madrid thrashed Fuenlabrada with the highest score and biggest points difference in the competition and now face Barça in the final.
WiZink Center
116

61
Real Madrid are into the final of the Endesa Super Cup 2019 against Barça (Sunday, 7:00pm CEST) after a memorable semi-final win against Montakit Fuenlabrada, who they beat by 55 points, beating the record for highest score (116) and biggest points difference in the competition. The reigning champions got 19 threes and 31 assists and an overall 167 PIR. nine players hit PIR double digits with Tavares (8 points, 10 rebounds and 7 blocks, a new record) and Campazzo (12 points, 9 assists and 26 PIR) leading the way. Laprovittola debuted (8 points and 5 assists) as did Mickey (13 points and 7 rebounds).

It did not look like Real Madrid's first game of the season. Their start to the Super Cup made them look like they’d played months in the competition. But in face they have only trained three times all together as a team. They started the semi-final clash on the front foot, in a first quarter in where they scored 28 points with a quick tempo and a spectacular success rates, especially from the free throw line with 83% accuracy (5 threes from 6). Randolph (9 points) and Carroll (7) got scoring, and Campazzo helping out (5 assists) and they were key for the Whites in the opening 10 minutes of Mickey's debut. He showed his quality with a basket and a block immediately after he came on (28-11).

Unstoppable
The madridistas started the second quarter in the same way as Montakit Fuenlabrada looked all but out of the game. The second string of players turned the screw even more. There was great squad rotation featuring two world champions and two World Cup runners-up. Laprovittola made his debut in white with 5 points and 4 assists. Llull was back to his best and Rudy was stellar as always, scoring three threes in a row to give Laso's team a boost before the break at +31, making it 52-31. The 80-9 in PIR showed the Whites' dominance.

The Whites did not sit back and relax, the reigning champions continued the show, dominating in the offensive aspect, thanks to Tavares punishing Fuenlabrada. The guard broke the appearance record in a Super Cup match with 7 and nearly had a triple-double (8 points and 10 rebounds) in the third quarter as Real Madrid scored 7 of 9 threes. Campazzo and Carroll increased the advantage to 40 as the score reached 80-36 on minute 29.

Historic game
Real Madrid have made it to the final by breaking records. With 5 minutes to go, the record 104 score in the Super Cup set by Joventut was still unbeaten. Mickey lit up the court with his threes. More records were set to be broken as the point difference record set in Vitoria in 2013 by the Whites with a +39 difference against Bilbao was shattered. Today the new record was set at +55. By the end the Whites had made 19 three and 31 assists, thanks to beautiful team play. Laso's team are one game away from the first trophy of the season. In less than 24 hours, Barça await them in the final after beating Valencia Basket by 71-65 (7:00pm CEST). 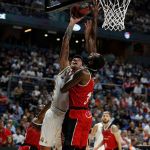