The 18 year old forward joins Real Madrid after shining in Brazilian football.
Rodrygo Goes (Osasco, São Paulo, 01/09/2001) has joined Real Madrid. The Whites have brought in one of the young talents of world football. At 18, the Brazilian striker has played 82 games with Santos and has also shone in the clubs youth teams. Rodrygo has been one of the big stars in the Brazilian League, where he stood out for his speed, changes of pace and goals.

Considered the latest hot property from the Santos academy, he made his debut with the first team in November 2017, at only 16 years of age. Since then, he has scored 17 goals and his progression has been unstoppable. In March 2018, aged 17 and two months, he became the youngest Brazilian to score a goal in the Copa Libertadores. This season he played with his team in the South American Under-20s. He was also one of the 10 candidates to win the first edition of the Kopa Trophy for the best player under 21, which is awarded by France Football, and is aiming to be the Golden Boy 2019. 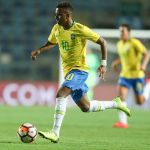