Real Madrid beat Chelsea in the tenth edition of this charity match.

4
The Santiago Bernabéu enjoyed 9 goals in the tenth edition of the Fiesta Corazón Classic Match 2019, which under the theme Heartbeat with Soul raised funds that will go to socio-sport projects of attention to diversity for groups at risk of exclusion from the Real Madrid Foundation. In the build up to the match, the group Taburete brought the musical to the party, the under-12s paraded their LaLiga Promesa trophy which they won last Sunday and the Parachute Brigade dropped out of the sky of the capital to land with the flags of Real Madrid, Chelsea and Spain.

The match brought together European Cup winners on the Bernabéu turf and delighted the audience from the first whistle. Real Madrid and Raul were the stars from the first minutes: recoveries, crosses and shots without success until in the 12th minute the opening goal came, as in the 2018 edition, from the right foot after rebounding off of Cudicini, after good play from Julio Baptista.

Whites domination
Just two minutes later, a spectacular combination between the captain and Guti, with a nice back-heel from the latter and Arbeloa's assist for Morientes, ended with the number 9 sending the ball to the back of the net. The Whites didn’t take their foot off the gas and with 19 minutes gone, a measured cross from Amavisca was finished off by Moriente with a tremendous header.

Chelsea reacted and reduced the deficit from the penalty spot thanks to Shevchenko, who had been brought down by Carvalho. It was in the 23rd minute, and just sixty seconds later Poyet scored after a cross from Malouda. César kept out a potential equaliser five minutes later with a great save. Both sides began to make changes and Karembeu increased the home side’s lead with a spectacular strike from outside the area to make it 4-2 at the end of the first half.

More goals
It was Chelsea, in the 46th minute who struck first in the second half thanks to a shot from Gallas after a Wise cross. Raul scored a penalty after Congo was brought down, before making way to a massive ovation from the Real Madrid fans. The minutes went by and tiredness crept in and the game became more open, and with 65 on the clock Malouda beat Contreras after a great run. The intensity did not drop at any time, with one side looking for an equaliser and the other looking to kill of the match. There were no more goals in the final stages and both sides thanked each other and the fans who had attended the Bernabéu. 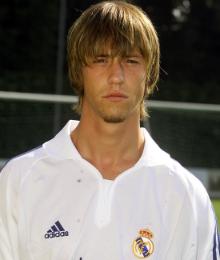 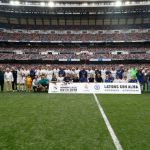