The Whites seal a playoff berth with seven rounds remaining after downing Bayern on their return to the Palacio in this competition. Five players posted double digits in the scoring stakes (Llull, 15 points and seven assists).
Wizink Center

78
The team's first objective of the EuroLeague campaign: to clinch a playoff berth has now been accomplished and that now makes it seven seasons in a row. Real Madrid closed out the month of February with a win, the team's 18th in the competition, against Bayern Munich at the WiZink Center, where the team hadn't played in the competition since 24 January. Five days on from the controversial Copa del Rey final and without Rudy and Thompkins, the Whites managed to switch their focus in a tough contest that swung in the hosts' favour thanks to a tremendous third stanza (29-13). Several players chipped in to help in offense, with Llull (15 points), heading up five players on double digits. Deck recorded the highest PIR on 18, whilst Tavares ended the match one rebound short of a double-double (10 and 9).

Nearly a month on from the team's last outing at the Palacio, Real Madrid was back on its home court. The host came out and showed greater patience than usual, with a first quarter featuring just three treys, two for the Whites and one for the Germans, and with much of the battle contested under the basket. Deck was in the thick of the action in this first quarter with nine points, four rebounds and a PIR of 12, including a triple on the buzzer that made it 22-17 in the 10th minute.

A fine minute
The introduction of Llull, Carroll and Taylor gave Real Madrid just what it needed on the outside: greater accuracy from distance. In the space of 1'05, the team tore up a run of 9-0 to make it 31-17 with two treys and a 2+1 from Wyoming, who ended the first half with 13 points. However, there was no consistency in offense for the rest of the quarter. The inside players need to contribute more and thanks to more aggressive defending, Bayern cut away at Madrid's lead with the Lo-Koponen-Barthel trident pacing the guests. The trio had netted 22 of the team's 39 points by the break (42-39, min. 20).

Real Madrid kept its focus defensively and when the hosts got the chance to run and break Bayern's slow tempo, they dictating proceedings with relative ease. Up until this point, the game was an even affair, with Dedovic bringing the guests to within a point at 46-45 in the 24th minute. However, it didn't take the Whites long to hit back. Laso struck gold with the quintet made up of Llull, Causeur, Deck, Randolph and Tavares. A devastating partial of 35-7 saw the team end the third quarter with an advantage of 19 points, courtesy of two star performers: Tavares, who was colossal (10 points and nine rebounds) and Randolph, who shone in offense and defense against Derrick Williams. A 3+1 from the American on the buzzer at the end of the third quarter established the biggest lead of the night at +19 (71-52).

A whole team win
In a last-gasp attempt to rescue itself, Bayern sped its play up and began to sink three-pointer after three-pointer with four treys to move back to within 11 points at 78-68 in the 35th minute. This, however, wasn't enough to catch a Real Madrid side who kept pace with the Germans' scoring in this final stanza. Llull, Taylor, Ayón and Reyes, who entered the fray for the first time, all did their bit. Six players finished on PIR scores of +10 and five in the scoring stakes to close out a win that mathematically clinches a playoff spot (91-78, min. 40). With no league match this weekend, the Whites now have a week to prepare for next Friday's EuroLeague Clásico at the Palau. 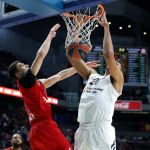