The Whites shone at the back and imposed their attack, led by Randolph (18 points and 5 three-pointers), against the best defensive team in the league.
WiZink Center

76
Important victory for Real Madrid, the fifteenth, as the final standings of the Regular Season take shape. The Whites came out on top over a direct rival, Baskonia, snatching second position before the break for the Copa del Rey. Laso’s team beat the side from Vitoria for the fourth time this season, in a match in which they shone in defense. Randolph, with 18 points (5/6 treys) and 22 points, was the best. Reyes was another of the star performers of the afternoon after receiving the tribute from Real Madrid and the ACB for his record of matches played in the league.

Two weeks after the victory against Fuenlabrada and three games away from home, the Whites returned to play in front of their fans. The curtain to the twentieth round for Real Madrid opened with an emotional tribute to Reyes for his 779 games in the league. As expected, the encounter was equal from the start, with the defense of Baskonia containing Laso’s attack, erratic near the basket and in which Randolph was the only played locked in to the three-pointers (11 points). The opponents, with the points shared between Vildoza, Shields and Poirier, went ahead in the first quarter (15-19).

From the defense
They improved in the second quarter, especially behind, gaining intensity and matching the rebound of Baskonia. That allowed them to grow in to the game, adding troops to the offensive cause. Diop opened up the maximum for his team at 15-23 in the 12th minute, but Real Madrid was cutting back the difference little by little with good work from Prepelic, Ayón and Tavares at different times of the quarter, which ended with a run of 22-18 and tie to 37 at the end of the first half.

Laso and his team adapted to a game with clear prominence for the defenses. It was accentuated in the third quarter, but if this was going to be a time to defend, Real Madrid knows how to do it very well. With everyone involved at the back, Perasovic’s side only picked up 15 points, seeing the Whites going in to the last quarter five up (57-52) after a 7-2 run in the last minute and a half. Randolph, already with 15 points (4/5 in treys) and Taylor were the focal points in Real Madrid’s attack.

The White’s attack
The run continued for the European champions who, with Carroll and Rudy in command, reached +12 twice with the score at 66-54 and 69-57, the latter in minute 34. By then, the fourth quarter found a much more offensive rhythm. Baskonia responded with Voigtmann getting three points in less than two minutes. But Real Madrid knew how to handle the decisive stage without panic, moving the ball with patience. At 77-73 and in the absence of 18 seconds, Randolph scored the final three-pointer, his fifth, to close out a very hard worked victory (82-76, min 40). The cup is here. Next Friday, against Estudiantes (9:30 pm CET). 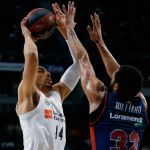