Florentino Pérez presided over the event that recognised the members who have shown their loyalty to the club for a consecutive period of 25, 50 and 60 years.
Real Madrid staged the ceremomy to present the 2018 pins to the club's longest-serving members at Arena 9 of IFEMA. A total of 4,593 members were recognised: 116 received the gold pin with diamonds (60 years); 1159 the gold pin (50 years); and 3,318 collected the silver pin (25 years). Club president Florentino Pérez presented the gold and diamond pins along with the club's honorary president Gento, whilst the gold pins were handed out by Amancio, Raúl, Pirri, Roberto Carlos, Arbeloa and Butragueño.

Emilio Butragueño, the club's director of institutional relations, presented the event, looked to the past in his address: "If we go back 60 years, in 1958, our football team lifted our third European Cup in a row thanks to a goal from our honorary president, Gento, the sixth LaLiga title and the basketball team won the second straight League title with a great side coached by Ferrándiz”.

"Fifty years ago, in 1968, we secured our fourth European Cup in basketball and the LaLiga crown in football, with Amancio our top goalscorer. In 1993, 25 years ago, madridismo mourned the passing of Petrovic and our football team captured the 17th Copa del Rey title after seeing off Zaragoza, whilst the basketabll team clinched the League. We're proud to share the feeling of being a madridista and without you, this wouldn't be possible. That's why we want to thank you for your loyalty towards Real Madrid”. 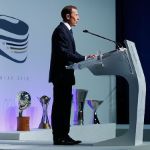