2
Real Madrid got three points at the Coliseum Alfonso Pérez in the fight to win LaLiga. A goal from Cristiano Ronaldo in the 85th minute decided the game, which was also Zidane's 100th in charge. The Whites have now strung together 13 away wins in LaLiga, the first team to do so in the competition's history.

The Whites had two crystal clear chances, and the first should have been well buried as they looked to open the scoring. Their rivals looked comfortable in defence. Benzema got on to the ball close to the penalty spot before passing over to Cristiano Ronaldo on 11 minutes. The Portuguese's shot forced Guaita into action. On 36 minutes, it was the attacking duo yet again, with a spectacular heeled pass from the Portuguese to the Frenchman who blasted a shot straight into an opposition defender, the ball flew wide, but the Whites were edging closer.

The opening goal
The Benzema-Cristiano Ronaldo connection looked menacing, and the French striker, who returned today after from an injury, managed to find the back off the net for Real Madrid in the 39th minute. After firing the ball at Cala, Benzema was exceptional in his finishing, slotting home with his right.

The second half couldn’t have got off to a worse start. Getafe levelled things up on 56 minutes with a goal scored by Jorge Molina from an off-side position and it was back to square one with more than half an hour still to go. Ten minutes later and Cristiano Ronaldo was inches away from putting the Whites back in front but his effort flew inches wide. Zidane sent Isco and Theo on with 72 minutes gone, in place of Lucas Vázquez and Marcelo.

Cristiano Ronaldo proves decisive
Moments after the substitutions, Madrid once again had a gilt-edged opportunity fall at the feet of Ronaldo. A dangerous free-kick was whipped in, but this time the Portuguese slid the ball to the wrong side of the post from almost on the goal line. Getafe had their own chance to take the lead on 80 minutes, but Arambarri was unable to get the better of Casilla. It was Cristiano Ronaldo who finally broke the deadlock up the other end just five minutes later, following a sublime Isco chipped pass which caught the hosts’ defence off guard. The best player in the world made no mistake and fired home to seal the win for Real Madrid on Zidane’s 100th game in charge. Attentions now turn to this Tuesday’s Champions League clash with Tottenham. 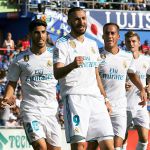