1
The three points just evaded Real Madrid against Levante. The Whites, who were by far the better side and had plenty of chances to win the game, had to settle for a draw against the team from Valencia at the Santiago Bernabéu. Ivi put the visitors in front, before Lucas Vázquez levelled the tie before the break. Zidane's men pushed on in search of the winning goal to the end but their reward was not forthcoming.

The Whites took their time to grow into the game in the first half, but Asensio and Benzema both looked threatening in and around the opposition box. Real Madrid gave first full debuts to Theo and Llorente, and they dominated the early exchanges despite failing to breach a stubborn Levante rear-guard. An isolated early chance turned the tie in favour of the visitors, who drew first blood to make it 0-1. Iván López launched a long throw into the area, which Ivi anticipated best to pop up and guide the ball past Casilla (12’). The goal didn't affect Zidane's men though, and they continued to look dangerous down both flanks. Benzema had looked sharp early on, before injury forced him off and he was replaced by Gareth Bale.

Equalising goal
A corner swung in by Kroos on 36’ changed the dynamic of the tie. Ramos, who else, rose highest and his header was well saved by Raúl, but Lucas Vázquez was on hand to poke home and bring the scores level from inside the six-yard box. From then until the break, the Whites upped the ante in search of another and laid siege to the Levante goal. With 38 minutes on the clock, Theo was upended in the area by Chema, before Bale, first with his head and then in a one-on-one with Raúl also threatened but to no avail. Kroos then struck a fine effort from distance but the teams headed for the dressing rooms with the scores level.

The start of the second half saw Madrid boss possession, whilst Levante set their stall up well defensively. Bale, once again, had the opportunity to have put the Whites into the ascendancy, but he could only send his headed effort over the bar. In a bid to see his side claim victory, Zinedine Zidane turned to his bench, with Isco and Mateo Kovacic entering the fray in place of Marcos Llorente and Lucas Vázquez. With the Whites' wing-backs providing real width, the game was now being played out entirely in Levante's half. However, the clock ticked by and no further goals were forthcoming.

Chances
The Whites kept plugging away in search of a winner right until the death. On 82' Asensio's effort was bound for the far corner, but Raúl palmed the ball way. In the 87th minute, a towering Bale header whistled narrowly wide of the upright. A minute later, Marcelo's fine strike was kept out by an outstanding save from the Levante custodian. In this same phase of play, the Brazilian received his marching orders for striking out at Lerma. In injury time, Kroos was denied by the woodwork and the game ended honours even. It's now time for Madrid to focus on the start of their Champions League campaign and Wednesday night's encounter with APOEL. 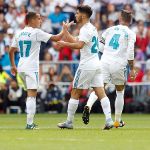