Another superb finish from Asensio and a goal from Benzema capped off a great performance against Barcelona.
Santiago Bernabéu

0
Real Madrid have won the Spanish Super Cup. There was no real sign of a comeback and the Whites needed only the first half to cap off the excellent work they did last week in Barcelona. Both Clásicos were master classes, the first in the Camp Nou to start off the tie (1-3) and the second leg in the Bernabéu closed the tie off in style (2-0), meaning they have now won their second title of the season. Zidane's side could not have started things off better in front of the home faithful.

In fact, after just four minutes of play, the madridistas showed, as stated previously by both Carvajal and Zidane in the press conferences, that they were out to win. Asensio controlled the ball well from 40 metres out and sent in a sublime shot that caught Ter Stegen off guard. It was both gilt edged and effective. A true golazo. It was a goal to watch again and again.

Lucas Vázquez hits the post
It was not the first warning sign from the Whites, as they could have scored in the 2nd minute as Modric fired in with a right footed effort, blocked by Umtiti just as it looked like it was going in. From 1-0, the game was a total frenzy. It was back and forth between the two boxes. Having said that, Real Madrid looked the better side, as they regained possession thanks to their constant pressure. Lucas Vázquez got one-on-one with Ter Stegen in the 33rd but could only hit the post.

The Whites’ pressure did eventually pay off, however, and just six minutes later they deservedly increased their advantage. Marcelo crossed for Benzema, who needed just two touches; one to cleverly beat his marker, and a second to calmly volley into the bottom corner and put the Spanish Super Cup beyond any doubt. Barcelona would now need five after the break to turn the tie around.

Chances
Barcelona had the first chance of the second half, but Messi could only find the cross-bar in a one-on-one with Keylor Navas on 53’. Two minutes later and Real Madrid responded, but Ter Stegen reacted well to deflect Benzema’s left-footed shot wide with his shoulder. Neither team was letting up though, and the chances continued to flow. Messi shot from the edge of the box on 71’ and Luis Suárez latched on to the rebound to head at goal, but the ball came bouncing back off the post.

The madridista fans were in for two further positives before the end of the clash in the form of official debuts for Theo Hernández and Ceballos on 75 and 80 minutes respectively. Real Madrid are Spanish Super Cup winners. Two out of two titles so far. 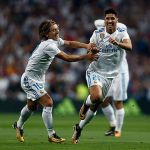