Strikes from Cristiano Ronaldo and Benzema sealed victory for the Whites in Málaga as Real Madrid secured their 33rd league title.
La Rosaleda

2
There was no slip-up from Real Madrid at La Rosaleda, and although a draw would have been enough to secure the league crown, the Whites went one better and overcame Málaga to capture their 33rd LaLiga title. A richly deserved crown for the madridistas, who this term have posted record-breaking stats on their travels and registered in each of their league outings for the first time ever.

The Whites showed their desire to clinch the title early on here and duly got their noses in front with barely two minutes on the clock. Luis Hernández fluffed his lines on a clearance and the ball fell to Isco, who slipped a sublime pass into Cristiano Ronaldo's path and the Portuguese forward skipped past Carlos Kameni before firing home into an empty net. Ronaldo's current form is quite extraordinary and he has now notched 14 goals in his last nine appearances.

Chances
Málaga looked to hit back and Sandro twice came close to restoring parity. On both occasions, Keylor Navas pulled off stunning saves, firstly denying the Canary Islander's drilled effort on 13' and then pulling out all the stops eight minutes later to keep out a free-kick from the angle. The sides continued to trade chances and Real Madrid had the chance to double their advantage just after the half-hour mark. Karim Benzema sent in a cross which travelled all the way across the box to reach Cristiano Ronaldo, whose touch to control took him beyond his marker and he then unleashed a left-footed strike, only to see Kameni showcase his reflexes.


Two minutes later the Cameroonian was back at the heart of the action, stopping Toni Kroos’ shot from the edge of the box, and then Keko had the chance to reduce the deficit in the 41st minute with a sublime header but the ball went wide. Just 45 minutes separated Real Madrid from the title.

Benzema scores
The second half started in a tense manner. Kroos sent in a corner in the 55th minute and Ramos was on hand, but Kameni was unbeatable and the ball went back and forth around the box before Benzema found the back of the net with joy. It was now 2-0 to the visitors and the LaLiga crown was closer than ever. Keylor Navas kept Málaga at bay in the 59th minute after Camacho sent in a thundering headed effort.

The minutes went by, and despite the fact that Málaga kept plugging away, Real Madrid did not look in danger of giving up the win or the title. They even had the chance to score a third in the 88th minute as both Álvaro Morata and Luka Modric tried their luck against the talismanic Kameni. The Whites, who have gone 64 consecutive games scoring, are LaLiga champions for the 33rd time. Well done to the madridistas! 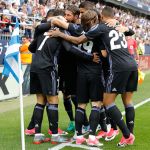