"You symbolise the greatness of this club, thank you very much for your support, affection and loyalty", said the president.
A celebration of Real Madrid in Alcalá de Henares. La Peña Madridista Ramón Mendoza supporters club celebrated its 29th anniversary with a meal that took place at the AC Hotel and was attended by 500 people. Florentino Pérez presided over an event attended by first team players Pepe and Nacho and the Whites´ legends Raúl, Sanchís and Mijatovic. All were received with a spectacular ovation and with the members of the supporters club waving Real Madrid flags and singing the anthem of the la Décima.

Speeches
Florentino Pérez took the floor and highlighted the work of the supporters club: "Thank you very much to all the attendees. We are greatful for the support, the affection and the loyalty that you have dedicated to Real Madrid during these 29 years. They are many years of loyalty and the transmission of all these values ​​that surround the beautiful madridismo feeling. Efigenio is the soul of this supporters club, he´s been in my heart since I met him".

"Pepe is the honouree today and it is a well-deserved homage. He represents very well that union between the team and the fans. He is an exemplary player on and off the pitch and who carries Real Madrid in his heart. In these ten years he has won everything and has a spectacular record. I can not have more than words of admiration, affection and respect for Pepe".

Values
"Nacho is a player who came through the academy and every day he represents the values ​​he learned in the academy. He is a man with talent, respect and sacrifice. He has been a worthy successor to other academy graduates like Sanchís and Raúl, who are here today. Mijatovic is the hero of the seventh European Cup victory and we are all very proud".

"This is the club with 11 European Cups. We have won two in the last three years. We have the goal of winning it again. We need you more and more and your support and affection. Because this is the most difficult stage of the season, the final stages, where we have the possibility to win everything but we need your support and sacrifice. You symbolise the greatness of this club, you work to make Real Madrid bigger and you can always count on the club and me".

More stars
Pepe addressed the members of the supporters club: "It has been a great honour for me to come here every year. The important thing is to honour this shirt, to have team spirit and humility, respecting the people who go to our stadium. I try to work every day to make you happy". Nacho also thanked them for the support he received: "It´s special to be here, thanks for the way you treat me. Every time I go out on to the field I feel like an important player, the affection I receive from you is great. Thanks to Pepe I am better player and better person".

Raúl: "It's an honour to be here"
"It's an honour to be here. I accept that presidency of honour with great enthusiasm. This is like my home. Thanks to everyone who is here today, band of course the supporters club. I´d like to say to Nacho that he represents the values of Real Madrid. He´s one of those players that as a madridista, you´re proud to see out there on the field".

"As for Pepe, who has brought together lots of us as both a footballer and outside of football. We met 10 years ago and have shared times and I know that you feel the madridismo affection. In June I return to live in Madrid and my next step is to work at Real Madrid and for this we have a few months to talk about where I can put my bit in to this great project that is led by Florentino Pérez".

Sanchis added: "Without you Real Madrid would not be possible. At this meeting all those great values we have are praised". And Mijatovic added: "It is a great honour to be here with you. Pepe is a great player and a great person and this homage is well deserved".

The event was also attended by Javier Rodríguez, Mayor of Alcalá de Henares City Council; Alberto Blázquez, Councilor for Sports; And Manuel Gómez, director of Real Madrid Supporters clubs. La Peña Madridista Ramón Mendoza was founded in 1988, has more than 300 members and is presided over by Efigenio Albaladejo. 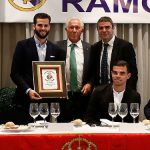