Goals from Benzema, Kroos and a stunning Casemiro volley hand the Whites the upper hand in their Champions League round-of-16 tie.
Santiago Bernabéu

1
Real Madrid  took a first step towards the Champions League quarter-finals as they overcame Napoli in a game which was decided in the second half. However, this victory was far from plain sailing. The Whites, who could have got their noses in front with barely 22 seconds on the clock courtesy of a Karim Benzema shot from inside the box which Reina pushed away, had to come from behind after the Italians drew first blood.

The visitors took the lead before the 10-minute mark when Insigne spotted Keylor Navas off his line and he swept home a curling effort from distance which caught the Whites' custodian off guard in the 8th minute. Madrid were forced to come from behind, and that they did just that. The hosts completely bossed possession and within 10 minutes were back on terms. A sublime cross from Dani Carvajal with the outside of his foot was met by Benzema, who powered the ball home with a towering header.

Benzema hit the post
The Bernabéu continued to spur their team on and the madridistas came a whisker away from repaying their fans' support with a second goal. Benzema and Luka Modric linked up and the Croatian saw Cristiano Ronaldo pull away from his marker, but the Portuguese forward's effort sailed over the bar. The hosts deserved to be 2-1 up and even more so following the final chance of the first period. In a direct and easy-on-the-eye move, Modric played the ball into Ronaldo's path and he knocked in a first-time pass to Benzema and the Frenchman manage to stab the ball beyond Pepe Reina, but the home faithful were frustrated as his effort shaved the outside of the upright.

The second half could not have got off to a better start. Just four minutes went by before Kroos put the hosts ahead. Cristiano Ronaldo deserved major credit for the build-up play. The Portuguese forward received the ball at an awkward angle, shook off Koulibaly, saw his teammate arriving and gave him the assist he needed. The German did the rest with a trademark right-footed stroke effort.

Sensational goal from Casemiro
Whilst the Bernabéu was still delirious from the second goal, along came the third for the hosts just five minutes later, as Casemiro rocketed in a sublime volley from well outside the box. It was a sensational goal from the Brazilian which will live long in the memory of Real Madrid fans.

Despite the advantage, Real Madrid kept on attacking and Cristiano Ronaldo picked up a pull-back from Benzema, who was having a great game. However, the Portuguese striker’s shot in the 65th minute blasted high above the goal and from then on the game itself was back and forth. Both teams had their opportunities, but Mertens, in the 68th, and James, just five minutes later, could not get past Keylor Navas and Pepe Reina respectively. Real Madrid got a great result which they will now have to defend at the San Paolo on March 7th. 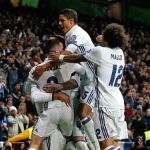