A brace from Isco and goals from Ronaldo, Benzema and Casemiro gave Real Madrid the win, as they notch their 39th game unbeaten.
Santiago Bernabéu

0
Real Madrid returned to LaLiga almost a month after their last game, doing so in style with a goal scoring masterclass. The Whites had the game against Granada at the Bernabéu wrapped up in less than half an hour which means they've now gone 39 official games without losing, equalling the best run in the history of Spanish football.

It only took the Whites ten minutes to go ahead, with Isco the author of the first goal. He picked up the ball in midfield, passing it to Casemiro, before the Brazilian moved it on to Benzema who was on hand with an assist for the Malaga born midfielder, who was calm in the one-on-one with Ochoa. With the scoreboard reading in their favour, it took another ten minutes to increase the deficit. Modric blasted in a shot from the edge of the box and Benzema pounced on the rebound to fire home. The Frenchman has now found the net in his last seven games against Granada.

Sensational Marcelo
The league leaders had the game completely under control and the half hour mark had barely been reached before they killed the game off completely. It was a sensational piece of play from Marcelo, who was able to shake off Tito twice and deliver a sweet cross which Cristiano Ronaldo latched onto to score a header in the 27th minute. The home side were tearing their opponents apart and just four minutes later they underlined their prowess, finding the back of the net yet again. Modric crossed the ball in from the right and Isco blasted the ball in. That goal means Isco now has two braces in the league this season.

The hosts even had the chance to notch the fifth right on the stroke of half-time in what was a sumptuous move. With 43 minutes on the clock, Modric sold his man a dummy to find space on the edge of the box, found a one-two with Benzema and his shot with the outside of his boot forced Ochoa into a fine save.

Casemiro gets his debut goal
Real Madrid didn’t take their foot off the gas in the second half, and with Benzema at the heart of several threatening moves the fifth goal eventually arrived with 58 minutes gone. James took charge of the free-kick and Casemiro caught everyone by surprise at the back stick to gleefully turn the ball home. It was the Brazilian’s first official goal of the season, meaning Coentrão is now the only one of Zidane’s outfield players yet to find the net.

Second consecutive clean sheet
The league leaders were relentless in attack and only the final whistle stopped them inside the opposition box. A second clean sheet in a row sees Real Madrid make it five consecutive victories ahead of this week’s double-header against Sevilla at the Sánchez Pizjuán. They play the second leg of the Copa del Rey last sixteen on Thursday before heading back for match day 18 in LaLiga next Sunday. 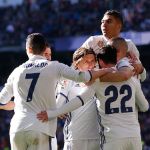