1
Real Madrid beat Athletic and are once again at the top of LaLiga. From early on the Whites, who now have three wins in a row, showed that they didn't want to let slip the opportunity to get back to the top of LaLiga. They only took seven minutes to go ahead. Isco, alert as always, took advantage of Saborit's lack of speed to get onto the ball in the box and provide an assist for Benzema. The Frenchman was on hand to put the ball into the back of the net.

The Whites seemed to be more and more comfortable on the pitch and looked to increase the deficit. Marcelo crossed in the 16th and Bale's header just went over. A minute later Athletic did just the same as Sabin Merino’s powerful header was also wide of the mark. This was a warning sign as just ten minutes later the Basque side had levelled. Eraso pounced on the rebound to assist none other than Sabin Merino, who did not miss this time in the one-on-one with Keylor Navas.

It was time to start again, the game was full of excitement, end to end stuff. It was Real Madrid who had the best chances before the break. Carvajal came close in the 41st minute but is was stopped by Iraizoz. Cristiano Ronaldo was off target after a pass from Bale in the 43rd and just two minutes later found himself one on one but on this occasion the visitor’s goalkeeper came out on top.

More chances
The second half began as the first had finish. Both side had goal scoring chances inside the first fifteen minutes. Williams with the best but he shot over in a one-on-one with Keylor Navas in the 52nd minute. Eight minutes later Benzema had a chance with his head after a cross from Isco, but Iraizoz kept it out. From here on it was the home side with all the chances, with the Basque goal coming under more and more pressure as the match wore on.

As the chances came for the madridistas, each one was closer and closer to the winning goal. In the 65th minute a Bale cross was met by Ronaldo but his effort went over. The Portuguese forward was involved again five minutes later as a delicate back heel from Benzema found him but his shot was off target. Lucas Vázquez, who had replaced Isco, crossed for the head of Kovacic who was just centimetres off target.

Morata the decider
The Whites had cleared deserved a second goal and maybe more after they saw yet another chance come up. An Exceptional pass between the lines from Kovacic, control from Lucas Vázquez and composure from Morata, who beat Iraizoz but the ball was kept out and cleared before it could cross the goal line. The youth teamer was on target just three minutes later however. Bale sent in a cross, the Spanish international player hit it first time and was able to take advantage of Iraizoz’s initial save to put the ball in the back of the net and get the win for his team on the day of his birthday. The team had to suffer right until the end as Williams had the chance to level again in the 85’ but Keylor Navas kept his cool in the one-on-one. Real Madrid are once again at the top of LaLiga. 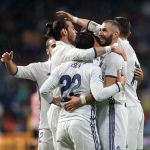