2
Real Madrid continue to set the early pace at the summit of La Liga, as the Whites claimed their sixteenth successive league victory against Espanyol to beat a club record and equal the all-time league best. Real Madrid are now just one win away from toppling the best-ever winning streak in the division. Neither side managed to get on top during the opening exchanges and it took until the eighth minute for either side to muster a goalscoring chance. It fell the way of the visitors as Sergio Ramos met a James corner, but the centre-back saw his header flash narrowly wide of the upright.

It took just three minutes for Espanyol to hit back and fashion their first chance of the game, but Kiko Casilla proved himself equal to Baptistao who was denied with the goal at his mercy. Zinedine Zidane was later forced to replace Casemiro with Toni Kroos after the former was on the receiving end of a knock from Diop.

Goal chalked off
Real Madrid eased their way into the game and by the half-hour stage were well on top. The Whites were pushed higher up the field and this saw them begin to enjoy more clear-cut chances. In the 39th minute, Karim Benzema met a fine cross from Marcelo and powered the ball home, however the Frenchman was adjudged to be in an offside position and the goal was ruled out. Three minutes later, Espanyol came close to taking the lead themselves when Baptistao's glancing header crept just inches wide of Casilla's goal.

It looked very much as if the two teams were destined to go in all square at the break. That was until James popped up in time added on to break the deadlock. The Real Madrid number 10 nutmegged Diop and fired low into the far corner past the reach of Diego López to edge the Whites ahead.

Benzema seals victory
Soon after the restart, Real Madrid had the chance to have doubled their advantage. With 59 minutes on the clock, Lucas Vázquez played in a cross which Marco Asensio cushioned back to Benzema, who took everyone by surprise with a fantastic two touches, the first of which saw the Frenchman bring the ball down and with his second he unleashed a volleyed effort on the turn which brought the best out of Diego López. Eleven minutes later, the French hitman wouldn't be denied his goal, as he applied the finishing touch to a fine team move. Lucas Vázquez shaped in an inviting centre which Benzema stroked home first time.

The Whites were now in a commanding position and to ensure that they moved back to top spot it was now just a case of seeing the game out. Real Madrid did just that, although Casilla was called into action when the flight of Felipe Caicedo's 75th-minute effort was altered after a deflection off Pepe. Isco came close to extending the visitors' lead with a strike from the edge of the area, but López got down to parry his effort to safety. The La Liga leaders go marching on, as they continue to rack up the wins. Next up for the league leaders are Villarreal at the Bernabéu on Wednesday. 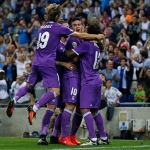