The players posed with la Undécima trophy during their return from Milan.
The party which started in the San Siro when Sergio Ramos lifted the trophy, continued in the plane that would bring the Madrid squad back home. The president, Florentino Pérez, the players and their families, all took photos with la Undécima on the flight which landed back in the Spanish capital at around 6 o'clock in the morning. 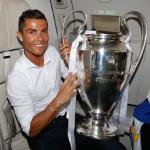