Florentino Pérez and Guillermo Fadda attended the event at the Real Madrid City.
The basketball squad received their official Audi cars in an event that took place outside the Real Madrid City and was attended by president Florentino Pérez, and director of Audi Spain, Guillermo Fadda. During the event the players were photographed before getting in to their new cars.

After a group photo gifts were exchanged. Florentino Pérez presented Guillermo Fadda with a personalized basketball jersey while the director of Audi Spain gave a replicant of the Audi Sport TT Cup. Afterwards the players and coach Pablo Laso got in to their new cars. 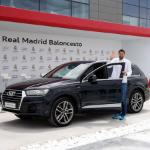