The Whites decided the match in a great first half, which  saw goals from James, Lucas Vázquez, Cristiano Ronaldo and Jesé putting them 4 points behind the leaders.
Santiago Bernabéu
4
0
Real Madrid orchestrated a goal fest against Éibar in a game that was decided in the space of 20 minutes, and they are now turning their attentions to launching a comeback against Wolfsburg. The Whites, who after the Barcelona defeat in Anoeta find themselves 4 points behind the leaders, only needed five minutes to opening the scoring. Jesé gained possession in the middle of the pitch, initiated the counter attack and was felled just a few metres outside the penalty area. James' free kick was on target and opened the scoring, with a good goal that was powerfully struck. It was the eleventh goal that Real Madrid have scored outside the area in this La Liga campaign.

This was a sign of things to come as before getting halfway through the first half The Whites closed the game down with two more goals. The First of which, and the team's second of the game, came in the 18th minute. The play was beautifully constructed. Isco picked up the ball in midfield, made a great pass between the lines and Cristiano Ronaldo did the rest. He positioned his body well and lost his marker, cut inside another defender with a dummy and assisted Lucas Vázquez, who scored with his left. Just one minute later they put the result beyond doubt. This time the Portuguese put the finishing touches on a counterattack following an assist from Jesé.

It didn't stay that way going into the break. Real Madrid scored yet another, which once again arrived by means of regaining possession and making a quick transition. The assist came from Cristiano Ronaldo again, who gifted two goals this evening, with Jesé finding the back of the net in the 39th minute. In the second half, the Portuguese could have added to his glorious evening if his diving header following Lucas' cross in the 48th minute had beaten Riesgo, who kept it out with a fine save.

More chances
Time passed and the pace of the game slowed slightly. Despite that, the hosts kept creating opportunities. In the 74th minute, Lucas Vázquez crossed in from the right and Cristiano Ronaldo's shot rose a few centimetres above the visitor’s goal. Éibar did the same five minutes later and came close to reducing the deficit with a corner that was heading for the far post, but Borja Bastón's shot hit the crossbar.

It was not to be the last chance of the game. Danilo had an opportunity in the 89th minute, but could not beat Riesgo one on one after a great pass from James. It ended as a Real Madrid goal fest two days before a decisive Champions League game against Wolfsburg. Both the team and the fans are now looking to stage a comeback in order to reach the Champions League semi-finals. 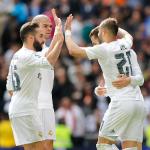