Next Tuesday sees Real Madrid play at home for a place in the Champions League semi-finals.
Wolfsburg Arena

0
Real Madrid were unlucky in Germany as they fell to defeat to a Wolfsburg side who established a two-goal lead in seven first-half minutes and were able to hold on to their advantage. Real Madrid now have to overcome this first-leg deficit in next Tuesday's second leg at the Bernabéu. The Whites have shown throughout the club's history that on home turf they are capable of pulling off whatever they set out to achieve, regardless of just how difficult it may seem.

Real Madrid dominated from the off, with a Cristiano Ronaldo strike being questionably ruled out for offside on two minutes. Just two minutes later, the Whites' penalty appeals were waved away after a Luiz Gustavo push on Gareth Bale. The visitors could have got their noses in front when Benzema found himself clean through against Benaglio on 14 minutes, but the Wolfsburg goalkeeper was equal to his effort. Just minutes later, it was the German outfit who took the lead. Rodríguez put his side 1-0 up on 18 minutes when he converted a penalty after Schürrle fell to the ground after he and Casemiro challenged for the ball. Before the Whites were able to react, the hosts struck a second after Arnold stabbed the ball home from close range following an Henrique cross.

Benzema forced off injured
Real Madrid would have to come from behind, but the visitors remained faithful to their game plan, which involved dominating possession and creating chances. Benzema had a clear goalscoring opportunity on 32 minutes, but his headed effort from Bale's centre flashed just wide of the upright. Five minutes later, Kroos tried to reduce the arrears from the edge of the box, but Benaglio once again proved his worth. Up until this stage luck was evading Real Madrid and their misfortune struck again as Benzema was forced off through injury on 41 minutes, with Jesé coming on in his place.

Further chances
The Whites continued to try to get themselves back in the game after the break. Four minutes into the second period they had a chance to have reduced the deficit as Bale got to the by-line and crossed for Ronaldo, whose strike came within inches of finding the back of the net. The pair combined again seven minutes later, as Ronaldo's again came a whisker away from scoring, this time with a headed effort.

Isco comes on
Wolfsburg were penned back into their area and Real Madrid sought to capitalise on this. On 73 minutes a sublime through-ball from Isco - who had entered the fray for Modric on 64 minutes - saw Ronaldo through with just Benaglio to beat, but the custodian got his body in the way to deflect the ball across the six-yard box.The Whites continued to go in search of a goal right up until the death, but were unable to find a way back into the game. Next Tuesday Real Madrid have the chance to turn the tie in their favour. A great night of European football awaits at the Bernabéu. 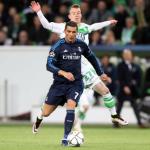