Goals from Cristiano Ronaldo, Mariño with an own goal and Isco give the Whites victory against Levante.
Ciudad de Valencia

1
3
Real Madrid won at the Ciudad de Valencia Stadium and got three more points in La Liga. The first half was pulsating with chances for both sides and a heart-stopping last fifteen minutes. Levante tried to deal the first blow just as the game got underway. Rossi unleashed a left-footed shot in the 5th minute but Keylor Navas displayed his great reflexes to keep out the ball twice. The Whites reacted. They did so with two chances, both involving Cristiano Ronaldo. Mariño showed great skill with the Portuguese player's shot hit with barely angle on goal in the 20th minute and the subsequent volley in the 32nd.

From that moment on up until the break, it was all a matter of goals, three in fact. The Whites took the lead. Orban clearly brought down Lucas Vázquez inside the area in the 34th minute and Cristiano Ronaldo showed no mercy from the penalty spot.

The second goal
Barely four minutes later, Real Madrid extended the lead. Danilo saw that Borja Mayoral was unmarked at the edge of the area and the academy side player, making his first start, took a shot that hit off the post and then off Mariño before going in. There was barely time to breath and no sooner had the game resumed when Levante shortened the lead. There was a long ball, a scramble in the box and Deyverson made the most of the confusion to beat Keylor Navas.

Real Madrid were the first to cause trouble following the break. James controlled at the edge of the area in the 52nd minute, he looked up and his shot, that became tricky after deflecting off a defender, came close to surprising Mariño. Two minutes later Nacho had an attempt from the edge of the area, but the Levante keeper's stretch prevented a goal.

Denied by the post
Cristiano Ronaldo's chance in the 66th minute was a lot clearer. The move deserved a better end. James provided a spectacular pass, beating the home defenders with a subtle left-footed touch, and the Portuguese player, without letting the ball drop, hit a left-footed volley only to be denied by the post.

Isco closed out the win
The Portuguese player was very active and could have killed off the game in the 75th minute. The move was very similar to the one that led to the second goal. Danilo ran down the right wing and crossed to the edge of the box. This time it was Cristiano Ronaldo with a shot and he was just a few centimetres from beating Mariño. Levante made a final push in the last few minutes but found themselves facing a solid Real Madrid defence, and the Whites increased their lead in injury time with an Isco goal from a Cristiano Ronaldo pass. 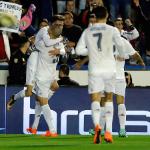