Goals from Cristiano Ronaldo and Jesé enable the Whites to take victory in Rome, they will aim to seal the knockout stage at home on 8 March.
Olympic Stadium

2
Real Madrid took a huge step forward in Rome towards the draw for the quarter-finals of the Champions League. Goals from Cristiano Ronaldo and Jesé in the second half sealed the win at the Olympic Stadium and gave the Whites an advantage in the knockout phase that they will aim to close out on 8 March at the Santiago Bernabéu.

The first half was more tactical and ended goalless. The visitors dominated the ball, they were solid and barely gave away chances. The Italian side were very organised, they sat back and tried without success to make the most of quick counterattacks through Perotti, Salah and El Shaarawy. Ramos' great performance played a key role in thwarting them.

Spectacular move
Past the thirty-minute mark, Marcelo came close to putting the Whites ahead. The move was dreamlike. Cristiano Ronaldo controlled in the 33rd minute, hit the ball up and the Brazilian, without letting it fall, improvised a volley that beat Szczesny but was just off target.

Everything changed in the second half. The Whites went out more incisive and began to tilt the knockout phase in their favour in the 57th minute. The move was created out of link up play between Marcelo and Cristiano Ronaldo. Kroos changed up the play with his left foot, the Brazilian controlled the ball with his chest and played a ball into space. The Portuguese star did the rest. He ran towards for the box, conjured a spectacular backheel to cut inside and put Real Madrid ahead with a right-footed shot that Szczesny could do absolutely nothing about.

More chances
From there onwards, Real Madrid improved and Roma slowed down, although Dzeko's introduction breathed a little more life into them. It was indeed the Bosnian who participated in the home side's most dangerous move. He brought down the ball on the penalty spot with his back to goal and kept it long enough to give it out to Vainqueur, who shot from the edge of the box in the 72nd minute but failed to hit the target. The Whites reaction was immediate and came a minute later. James sent in a spectacular cross and Cristiano Ronaldo rose ahead of Szczesny, but his header grazed the post.

Jesé Scores
The initial order gave way to unruliness and an exchange of shots. One team's attack was followed by a reaction from the other. In the 78th minute came a cross from Cristiano Ronaldo and a header from James. Two minutes later Roma responded through Dzeko, slightly over on the wing, he sent the ball into the side of the net in a one-on-one with Keylor Navas. However, the definitive blow came courtesy of Jesé in the 86th minute. A run from the academy player and a perfect curling shot sealed the win and Real Madrid's gigantic step forward in the knockout phase. 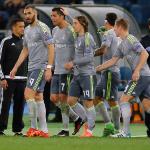