The team completed the first training session of the week at Real Madrid City.
The squad went through their paces for the first time this week at Real Madrid City, in a work-out conducted without the players on international duty. Sergio Ramos, Marcelo and Isco trained with the group in a session that saw Rafa Benítez include the Real Madrid Castilla men José Carlos Lazo, Héctor Martínez Torres and José León. Keylor Navas did work inside the club's indoor facilities.

A demanding session began with a warm-up using the ball, with the players taking part in one-on-one challenges in which the aim was to pass the ball between slalom poles placed on the field. The Whites then carried out a range of dribbling and pressing drills, before doing attack-defence exercises. Training concluded with an intense match played on a small-sized pitch. 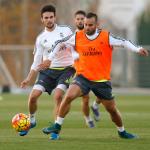