The coming season will be his 10th at Real Madrid. An achievement reached by very few in the history of the most lauded club in Europe. He arrived at 19 from Manresa as a future prospect and now he is an idol of the fans, who enjoy his play chanting “Llull, Llull, Llull”. His energy, commitment and fighting spirit have always been the hallmarks of his identity but over the years he has refined his game to become one of the stars of European basketball.


In this past League championship he was crowned MVP of the final, posting the best numbers of his career, and also won MVP of the Super Cup. In 2012 he was named Best Player of the Copa del Rey and two years later, in Malaga, he took centre stage scoring the decisive basket in the final second in the final against Barcelona. Adding to his personal success were two trophies as a member of the ACB All-Star team (11-12 and 14-15). Indomitable and brilliant, the Incredible Llull will continue to bring joy to Real Madrid. 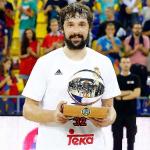