Real Madrid defeat Fenerbahçe following a masterclass in the second quarter (35-14) and will play Olympiacos in the final.
Palacio de los Deportes

87
Real Madrid qualified for the final of the Euroleague after a really clear win against Fenerbahçe Ulker. The Whites had a brilliant team performance with a decisive second quarter and took a 27 point advantage at one point. Ayón (18 points, 7 rebounds, 6 assists and a PIR of 30), Rivers (17 and 5/6 three pointers) and Nocioni (12and a PIR of 18). Madrid will play Olympiacos in the final, in a repeat of the 2013 London final. 40 minutes separate them from their ninth title.

The start of the game gave a glimpse of what has been one of the most even Final Four stages of late. Fenerbahçe made the better start to the game up until the 5' minute with greater accuracy from short distances (6-8). Reyes was sent to the bench for two personal fouls as Sergio Rodríguez came on. With him on the court, Madrid had a more clear sighted approach in attack. Rudy and him (10 points between them) got the initiative back over the coming minutes (18-15). Vesely (8 points) and a basket from Preldzic on the buzzer, kept the game even (20-21, min. 10).

The perfect quarter
What was about to happen in the second quarter is something that only special teams are capable of. They had done it in the Milan semi-final against Barcelona and they did it again today. They literally swept Obradovic's men of the court with an incredible defensive display and a three pointer exhibition (5), that really took Bogdanovic, Bjeliça, Vesely and company out of the game. This was Madrid in their purest state.

It began with ‘Titan’ Ayón, the owner and lord of the zone. Neither Erden nor Vesely could stop him (16 points, 5 rebounds and a PIR of 24 at the break). A very aggressive Nocioni joined him, and his attitude was picked up by the rest of his team mates who completely turned the game around with their intensity (8 points and 4 rebounds). El Chacho added the turbo drive, Maciulis did the hard work Rivers performed from the three point line with a spectacular 4/4 shots and great defence on Bogdanovic (3 points), in order to break open the game with a run of 35-14 and go in at the break 55-35.

To top it all for the large number of Turkish fans, who had around the same number of fans as Madrid, as the two sets of fans with the greatest presence in the Palacio, the Whites continued to give a masterclass from the three point line with three more. Carroll's last one left them with a +27 advantage (64-37, min. 23). With Ayón and Nocioni getting their energy back in the bench, Fenerbahçe tried something new in order not to give up on their first appearance in a Final Four. Goudelock, Bogadanovic and Vesely led a run of 7-20 (71-57, min. 39).

It was time for the night's three men to return: Nocioni (an enormous block on the MVP Bjeliça), Ayón and Rivers did away with the hopes of a rival who had made the game so physical it was on the point of being against the rules. The North American managed to make his fifth three pointer, setting a record for the Final Four (5/6). With everything decided, Laso's men were able to tolerate the heavy blows of a rival who were not able to stop them at all. Llull, with the 14th three pointer from the Whites, sealed passage into the final. The Madrid fans enjoyed another great game for their side (96-87, min. 40). Olympiacos are the last obstacle. 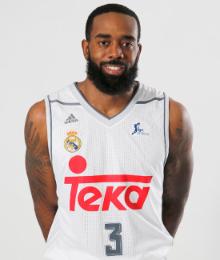 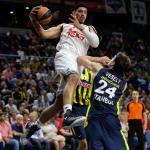