Cristiano Ronaldo, with a brace, and Benzema were the scorers for a Real Madrid side that go into the draw for the last eight on March 20.
Santiago Bernabéu

3
4
Real Madrid will take their place in the quarter-finals of the Champions League for the fifth consecutive season. The Whites' 0-2 first-leg advantage was sufficient to see them seal their passage after a frenetic encounter in which the hosts were put on the back foot early on, Fuchs beating Casillas from inside the area to give Schalke the lead in the 20th minute.

The European champions were still ahead in the tie, but needed to produce a reaction in front of their home crowd, and did so swiftly. They took just five minutes to level the match, as Kroos delivered the corner and Cristiano Ronaldo guided the ball into the net with a splendid header. All square once more.

Against the bar
The Whites set out in search of a second, and a drive from Bale from the edge of the area forced Wellenreuther into a good save on 35'. The hosts seemed close to taking the lead, but moments after a Huntelaar effort had hit the crossbar, the Dutch striker put the Germans back in front. The former Real Madrid man was alive to a Casillas parry on 40', and took full advantage to finish unmarked from around the penalty spot.

The teams looked set to go in for the half-time break at 1-2 but, having cancelled out the visitors' opener inside five minutes, the European champions needed exactly the same amount of time to draw level once more. Cristiano Ronaldo was again the scorer, beating the Germans' goalkeeper with another header from a measured Coentrão cross.

Goal from Benzema
The second half could not have got off to a better start. Real Madrid took the lead within seven minutes of the restart. Coentrão made his way into the area and fed Benzema, the Frenchman going on to produce a work of art. Cutting in from the left, he shrugged off two opponents, and the visiting keeper, scoring into an empty net from by the penalty spot. However, the home team's joy did not last long, as Sané surprised Casillas with a powerful shot five minutes later.

Modric returns
Ancelotti opted to introduce Modric, the Croat making his return to action more than three months after suffering injury, and playing more than half an hour of the match. Arbeloa came close to scoring the fourth on 65', but Wellenreuther denied the defender when one-on-one. And with five minutes to play, Huntelaar found the net again. The Champions League holders' 0-2 advantage from the first leg was enough to see them through, and they now await the identity of their quarter-final opponents in the draw in Nyon on 20 March. 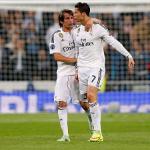