Cristiano Ronaldo gave Real Madrid the lead, but Villarreal levelled the scores and held out despite the Whites' attacks.
Santiago Bernabéu

1
The La Liga leaders gave it their all right to the end against a stout Villarreal outfit. The Whites came out in dominant mood opposite fearless opponents in a first half that ended goalless. The hosts produced the greater of the attacks on their rivals' area, but it was the team from Castellón who were closer to opening the scoring, denied first by Casillas in a one-on-one with Gerard on 12', before Carvajal's headed goalline clearance from Moi Gómez's effort.

Real Madrid could also have scored before the break, enjoying two clear opportunities. The first saw Kroos deliver a corner on 34' for Varane to climb the highest, his header flying centimetres wide of Asenjo's goal. The final chance of the first half then fell to Bale, as his cross-cum-shot surprised everyone and bounced off the bar after 41'. There were 45 minutes remaining to come out on top and maintain a four-point lead over second place in the battle for the title.

Cristiano Ronaldo takes centre stage
The Whites produced an overwhelming start to the second half. In the space of just six minutes, they had had a great chance to score, earned a penalty and broken the deadlock. Both incidents saw Cristiano to the fore. An angled shot from the Portuguese on 48' forced Asenjo into a save, before three minutes later Carvajal crossed and Real Madrid's number 7 was held by Bailly as he prepared himself to get on the end of the header. The top scorer in La Liga made no mistake from 12 yards, sealing his 30th goal in the top flight this season. He is the first player to reach the tally in five separate Primera División campaigns.

The hosts' joy did not last long. Just twelve minutes. Gerard took full advantage as Kroos's attempted clearance fell to him and he beat Casillas with a low drive into the corner. With just over 25 minutes to go Madrid had to go again, and there was to be no want of trying. Indeed, Cristiano Ronaldo was close to claiming his second after 69' and 71', but Asenjo did superbly first to deny the forward on a one-on-one, before stopping a header from the Portugal man.

Ancelotti introduced Jesé then Chicharito as he sought to win the match. The Canary Islander could have scored on 84', but was off target after Asenjo missed the ball having come out to claim Marcelo's cross. A clearance from Costa that almost caught out his keeper, and a header from Cristiano, were the final chances for a Madrid side who put everything into it until the very end. 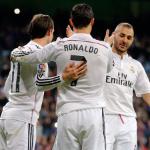