4
0
Real Madrid slipped up in the Vicente Calderón in a match where nothing came off for the team. The Whites had conceded two goals before the 20-minute mark. The first blow came through an effort from Tiago, who finished off a Mandzukic assist with a volley in the 14’, while Saúl got the second in the 18’ after finishing off a Siqueria move with a bicycle kick.

Real Madrid controlled the game from the half-hour mark until the break. The Whites played the ball in the oppositions' half of the pitch and bore down on the final third, where their rivals defended extremely tightly, but they were unable to find a way of narrowing the deficit.

Jesé came on for Khedira at the beginning of the second half. The Whites had more muscle in attack and held the majority of the possession, but Griezmann got on the end of a Saúl header in the 67’ to make it 3-0 and further complicate matters for Real Madrid. Mandzukic got the fourth in the 88’. Despite the setback, the Whites remain league leaders and winning La Liga is still in their hands. 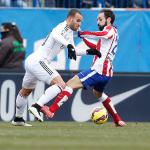